Anthropocene Calamity, part 6: Are you spending your attention and money well?

This is part 6 of an 11 part series. For the introductory post to set the tone, please see Holy shit things are super bad.

Hurricane Ida from last year was the second most powerful and deadly hurricane to hit Louisiana ever. While Katrina still takes the cake, once-in-a-hundred-year storms are happening much more regularly than once in a hundred years! Climate change is clearly not the cause of hurricanes–they have always happened–but the intensity and frequency of hurricanes, and many other forms of extreme weather, are absolutely exacerbated and intensified by climate change. So, it was a notable moment to Media Matters, a media watchdog, that broadcast and cable news programs only mentioned the climate in just 4% of Ida coverage!

Jeff Zucker, former CNN president, when asked in 2014 why there wasn’t more climate coverage, said,  “We haven’t figured out how to engage the audience in that story in a meaningful way,” and after 2018’s better-than-normal coverage on the climate crisis by Chris Hayes on MSNBC, Chris Hayes said: “almost without exception, every single time we’ve covered it’s been a palpable ratings killer. So the incentives are not great.”

How can we expect voters to hold politicians to account over the greatest crisis of our lifetimes if voters can’t even see the connection? News networks are some of the only organizations that can force nationwide or even global conversations, and the overall vibe from them on an existential crisis is, “nah, that’s a buzzkill.”

In the recent Netflix documentary “The Social Dilemma,” engineers at Facebook, Google, and Twitter explain how the natural internet extension of “following the ratings” has led to a panopticon of ads and behavioral tracking. On the one hand, this is of course terrifying, but on the other hand, it leaves a brand new opportunity open: we can train the panopticon! We can train all of the media, social, traditional, and otherwise, by showing up and demonstrating that coverage on the climate gets clicks, attention, focus, and sharing.

CNN and news networks respond to ratings, and coverage of a fundamental existential threat to humanity should be all we are giving news networks attention for. Climate content can’t be a “ratings killer!”

So, action 1: Spend your attention to reward national attention on the climate. It’s urgent. It’s time to turn your social media up to 11 on climate content, and to share it with anyone and everyone.

You might be surprised that I haven’t spent more time talking about exciting new technologies that might save us. Solar and wind energy are becoming vastly less expensive than anything else, electric cars are exciting, geothermal HVAC is really cool, lab grown meat could maybe be something, etc., etc. Direct carbon capture is on the way! There are lots of people trying to solve this problem with technology.

Perhaps electric cars are the most tangible example to discuss - electric cars started out either extremely niche or extremely expensive. Fortunately, early adopters were willing to spend extra to get these green vehicles, even though they weren’t ready for mass market adoption. Those purchases demonstrated market viability and helped fund additional research and development. Now we’re at a point where 41% of consumers say their next car will be electric! Electric cars are no longer undesirable go karts. 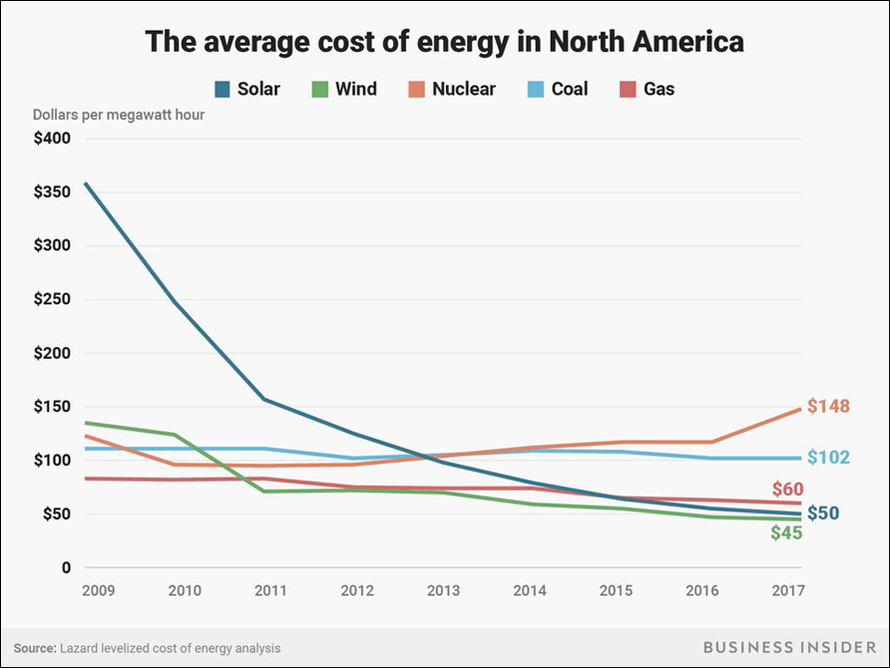 The price of solar energy has plummeted! Hooray!

Technology also has the potential to be deployed directly against carbon and help us sequester carbon from the atmosphere. You can buy high quality carbon offsets from companies that do permanent carbon removal like Climeworks, Project Vesta, or Recoolit. I want to give a special shoutout to Recoolit’s most recent blog post, No Refrigerant Left Behind, as it not only gives a great explanation of the shaky carbon offset market, but also is a great project! They need investment urgently.

So, action 2: if you have money, investment in green technology drives economies of scale.

Are you buying and investing in things that are green? Get an electric car. Get battery-backed grid energy. Get solar panels. Get geothermal HVAC. Buy as many carbon offsets as you can. These things will not only help reduce your long term carbon footprint, retire carbon emitting technology, and maybe even sequester carbon directly, but will also help drive down costs and bring these technologies to more people or make them more effective. And if you do have to fly, pay the few dollars for the sketchy airplane carbon credits. It still signals to the airlines that you care.

As Kelly Erhart (cofounder of Project Vesta) pointed out to me in a call a month or two ago, 15-20 billion tonnes of CO2 need to be removed from the atmosphere every year, and there are only 11 million tonnes of carbon offsets being traded on voluntary markets. We need just an enormous amount of investment here and every bit helps.

Honestly, it’s probably a good idea to buy these things while the global economy will still support these types of purchases. Check out the next post: It’s seat belt time.